Given the narrow proportions of this small office building, the main objective was to maximize the amount of transparency while creating a buffer between the office areas and the buzz of Old Street. t.

The folding and tilting of the glass storefront produces multiple reflections, blending the images of exterior and interior. A second glass screen separates the entrance lobby from the working area at the back, and serves as an additional acoustic and visual buffer. The introduction of a pavement light and an internal light well allow the ground floor and formerly unusable basement to become one vertical space with varying degrees of visibility and privacy.

VERTICAL DATUM-The aim of attaining a maximum amount of daylight and visual information for the deep ground floor plan and basement, whilst shielding it from abundant noise and pedestrian traffic, was achieved through multiple layers of glazing. The first reflective plane –the street-front façade– deals with the perception of exterior and interior space. Maximum materialization of the glass plane was achieved by folding and tilting it into different segments so it would reflect the same image at different stages according to its movement and to the movement of the viewer. In this way, the glass virtually loses its transparency to become a screen that overlaps reflections of the context and the interior. The second and third layers–a full height glazed fire screen and a glass balustrade–act as resounding screens that echo the reflections from the street, and thus act as a protective filter while allowing light and views to penetrate the deep space. This series of glass layers produces reflections that inform the space with images and light while framing the activities between them.

HORIZONTAL DATUM-While the aforementioned vertical layers connect the space horizontally, two horizontal incisions connect vertically to the previously unusable basement. The first, a pavement light in sandblasted glass permits a coloured light to flow into the basement. Spilling onto the sidewalk, this light behaves as a negotiator between the private and the public realms by blurring their edges. This semi-transparent surface connects the basement with the outside, offering information about movement, weather and light conditions above. The second incision–a rectangular opening of roughly 1.6 m by 2 m–carries light and air to the formerly unusable basement. It creates one large space with varying degrees of visibility and privacy. White walls and ceilings contrast with black stained plywood floor panels, laid out in a grid of 0.9 m by 2 m. All the incisions and reflective layers, as well as part of the lighting are positioned in relation to this modular. The choice of colours and spatial organization create a neutral, orthogonal backdrop against which the facade and the ephemeral phenomena stand out. The white surfaces act as a canvas that receives the moods of the weather, and instant reflections and tints from passing cars, while the black floors turn into a deep velvet sea. 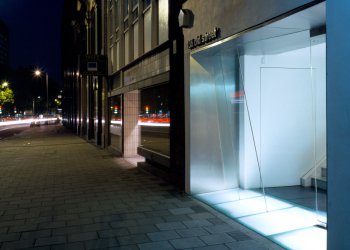 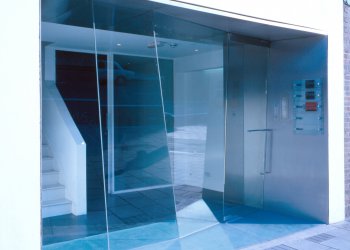 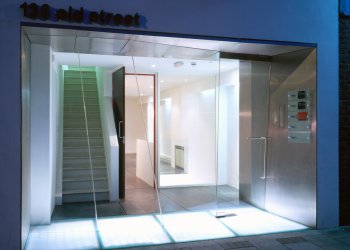 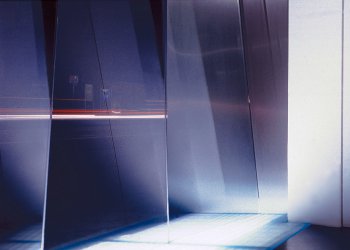 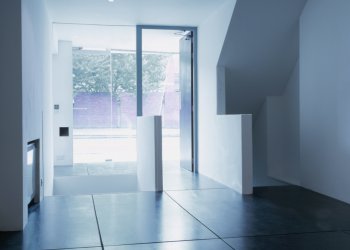 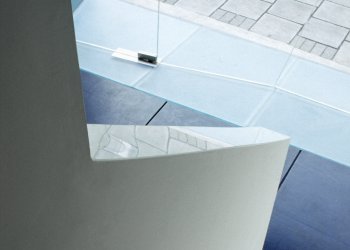 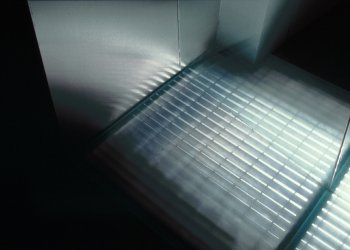