From Classical Chinese architecture, Plasma Studio thought out the organization of the building as a linear sequence of planes. This cinematic–yet vernacular–sequence frames a series of projections that together produce a seamless transition from the urban (city) scale through the landscape (park) scale and into the riverbank.

Guangzhou One Center One Garden

The central axis (imposing a rigid symmetry) is disturbed by the curvilinear, meandering flows of the landscape around it, producing twirls and ripples that guide and gently affect the visitors' trajectory. All possibilities to establish direct links are choreographed using the presence of the performance center as the key articulation point, where flows are collected, channeled and materialized into a manifold of spatial configurations.

Plasma's proposal emphasizes the trajectories as the formative element of the landscape, where their imprint produce folds of various scales, ripping off the ground, peeling off the surface, uncovering the grass beneath and creating shading and sitting devices.

The building as a non-hierarchical response to the accesses to the park and the relationship to the main plaza is in principle symmetric and flanked by two ‘ditches’ eaten away at both sides of the performance area, creating sheltered passages and channeling the wind. The southeast flank of the building is corroded to align to the prevailing wind direction, opening up towards it and capturing its flows.

The shift in the symmetry is continued internally, where a morphological exemption is created; a moment of difference and intensity within the building using the ramps' system as its main expression and the lobby as its immediate context. This variation follows the arrival in the building and all the way into the courtyard, at which point, the flows regain their symmetric alignment and readopt the orthogonality to both sides of the theater. This condition is also translated onto the structural system, linking directly to the ramps and running along with them, framing the volume at both sides, just before the skin.

The circulation within the performance center–likewise within the landscape and the plaza–is organized sequentially: upon arrival in the lobby, a system of ramps proceeds sinuously through uninterrupted loops, gently connecting all levels and using as pivoting point the internal courtyard. The internal circulation unfolds as a U-turn coming from within the outside plaza, returning towards the plaza but at a different level, to finally hoover over the outdoors amphitheater whilst being at the ‘formal’ theater.

Besides its central body, containing the more public activities such as the lobby, exhibition space, theater and café, the building counts with two wings where the support functions related to formation, education and rehearsal are located. These wings are connected to each other and to the main building through a large basement, where the production and administration facilities are. These functions behave as the framework of the building, its skeleton, both infra-structurally and conceptually embracing performances and public events through background support. 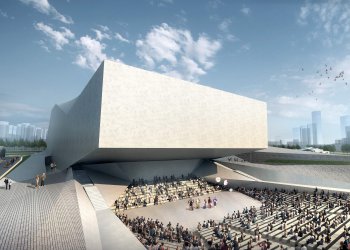 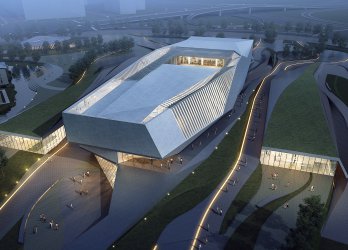 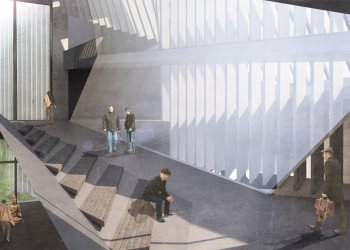 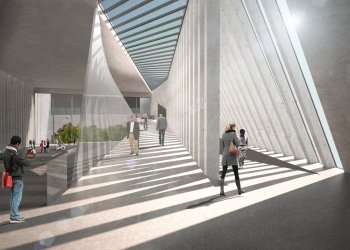 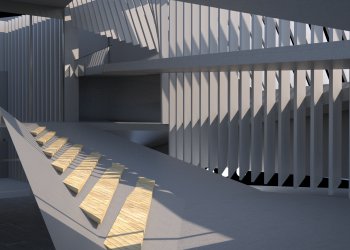 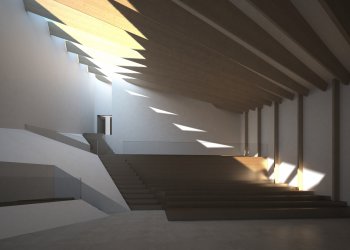 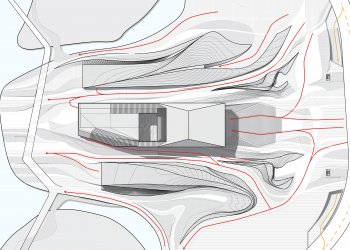 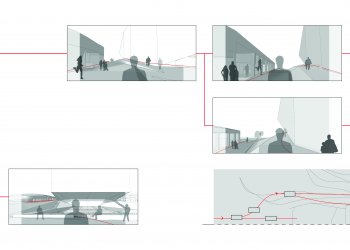 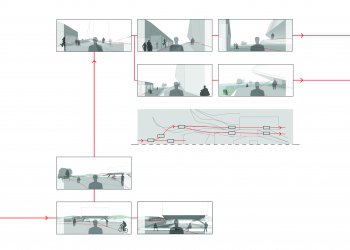