By deriving its form from an indexical transformation of the host space’s geometry, this sinuous, meandering skin works as screen and mediator between inside and outside, old and new.

Fluxo Rosa (Pink Flux) enhances the threshold condition of the colonial colonnade by:

1. Undermining its linear perimeter with a continuous zigzagging surface that re-establishes a physical relationship to the contiguous plaza.

2. Closing-up at first instance the visual connectivity and then opening-up specific pinholes in the base of the cones that describe the precise axis between windows in the north side of the gallery and the larger openings in the south wall.

Transgressing the boundary between inside and outside, Fluxo Rosa remains ambiguous in creating a dialogue between the existing traditional spatial concept of repetitive spatial modules and its own continuous variation. It invites for exploration and discovery of the differences in light and spatial conditions along the length of the space and throughout the day. 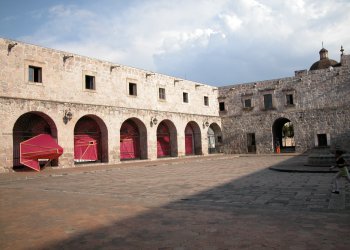